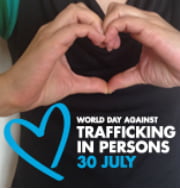 The United Nations (UN) World Day against Trafficking in Persons is observed every year on July 30 to raise awareness of the plight of human trafficking victims, and promote and protect their rights.
Human trafficking is the trade of humans, most commonly for the purpose of forced labour, commercial sexual exploitation or sexual slavery for the trafficker or others.
The 2017 theme of the day is “Act to Protect and Assist Trafficked Persons”. It highlights the large mixed migration movements of refugees and migrants. It also puts the spotlight on the significant impact of conflict and natural disasters, as well as the resultant, multiple risks of human trafficking that many people face.
It also seeks to addresses the key issue concerning trafficking responses i.e. most people are never identified as trafficking victims and therefore cannot access most of the assistance or protection provided.

The United Nations General Assembly (UNGA) had designated July 30 as the World Day against Trafficking in Persons by adopting resolution A/RES/68/192 in 2013,. The resolution had declared that the observance of the day is necessary to raise awareness of the situation of victims of human trafficking and for the promotion and protection of their rights.