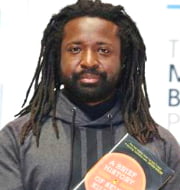 Jamaican author Marlon James has won the prestigious 2015 Man Booker Prize for his novel A Brief History of Seven Killings. With this, he became first Jamaican to win Man Booker Prize.
His 680-page epic novel is inspired by the attempted assassination on Jamaican reggae musician Bob Marley in the 1970s. It has been published by Oneworld Publications.
Judges had shortlished James’s from a list of 8 writers including him along with India’s Sunjeev Sahota, Hanya Yanagihara, Tom McCarthy, Anne Tyler, Chigozie Obioma and Marlon James.