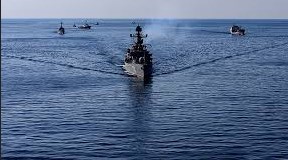 Iran and Russia recently held “Iran-Russia Maritime Security Belt 2021″, a two-day naval exercise. The exercise is being held in the northern part of the Indian Ocean. Iran claimed that India had joined the security bely. However, Indian Navy clarified that it did not participate in the exercise.

It is a branch of the Iranian Armed Forces. The branch was founded after the Iranian Revolution in April 1979. The IRGC was founded by the order of Ayatollah Ruhollah Khomeini. It defends the Iranian borders and maintains the internal order. The Iranian Constitution has tasked the Revolutionary Guard with the work of protecting the country’s Islamic republic political system. It also helps in preventing the foreign interference and coups.  The Revolutionary Guards had 250,000 military personnel as of 2011. It includes ground forces, aerospace forces and the naval forces. The Naval forces are the primary forces having operational control of the Persian Gulf. The naval force also controls the paramilitary Basij militia. Sepah News is the media arm of the IRGC.

It is the Mediterranean Sea in the West Asia. The gulf is an extension of the Indian Ocean. It is extended through the Gulf of Oman and Strait of Hormuz. This water body is situated between Iran in the northeast and the Arabian Peninsula in the southwest.