International Day of the Tropics: June 29 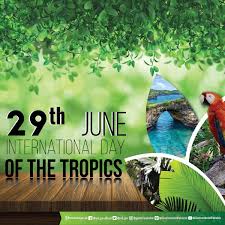 The International Day of Tropics is observed every year on 29 June across the world with an aim to raise awareness to specific challenges faced by tropical areas and t far-reaching implications of issues affecting world’s tropical zone. This day celebrates diversity of tropics and provides opportunity to share tropical stories and expertise and to acknowledge the diversity and potential of the region.

The Tropics are region of Earth between tropic of Cancer and tropic of Capricorn. The tropical locations are typically warm and experience little seasonal change in day-to-day temperature, even though their topography and other factors contribute to climatic variation. The peculiar climatic feature of Tropics is prevalence of rain in moist inner regions near equator and increase seasonality of rainfall with distance from the equator.
The Tropics account for 40% of world’s total surface area and are host to approximately 80% of the world’s biodiversity and also much of its language and cultural diversity. The region is facing number of challenges such as climate change, deforestation, logging, urbanisation and demographic changes.

Ecosystem
The Tropics host nearly 95% of world’s mangrove forests by area and 99% of mangrove species. The area of mangrove forest in all tropical regions has decreased since 1980. They have just over half of the world’s renewable water resources (54%) and yet almost half their population is considered vulnerable to water stress.
Biodiversity is greater in Tropics across most taxonomic groups with equivalently higher proportion of threatened species. For those plants and animals for which there are adequate data, loss of biodiversity is greater in Tropics than in the rest of the world.
Human system
Tropics region is consistent with higher levels of poverty, more people experience undernourishment than in the rest of the world. Besides, proportion of urban population living in slum conditions in Tropics is higher than in rest of the World. By 2050, the tropics region will host most of world’s people and two-thirds of its children.

The International Day of the Tropics was instituted by United Nations General Assembly (UNGA) on 14 June 2016 by adopting resolution A/RES/70/267. The day was proclaimed to mark anniversary of launch of ‘State of the Tropics Report’ by Nobel Laureate Aung San Suu Kyi on 29 June 2014. The report was culmination of collaboration between 12 leading tropical research institutions and offered unique perspective on this increasingly important region.
This day aims to raise awareness to specific challenges faced by tropical areas, far-reaching implications of issues affecting world’s tropical zone and need, at all levels, to raise awareness and to underline important role that countries in tropics will play in achieving Sustainable Development Goals (SDGs).