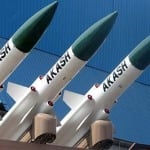 Indigenously developed supersonic surface-to-air Akash Missile has been inducted in Indian Air Force (IAF).
The Akash missile was inducted by Union Defence Minister Manohar Parrikar at a function held at Maharajpur Airbase in Gwalior after he handed over the symbolic key of Akash defence system (ADS) to Air chief Marshal Arup Raha.
It should be noted that Akash missile already has been included in Indian Army. It was inducted in Army in May 2015.

Initially, 8 squadrons of ADS will be inducted in IAF as per the contract. Each squadron will have 2 firing units and 4 launchers. Each launcher has a capacity to 3 three missiles in quick succession.