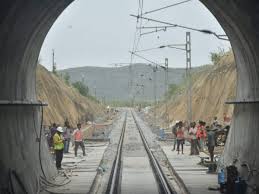 It is located between Cherlopalli and Rapuru Railway Stations in Andhra Pradesh. It was built at a cost of Rs. 437 crore and has 44 trolley refuges and 14 cross-passages in a horseshoe design. New Australian Tunneling Method (NATM) was used to construct this tunnel. Its total length is 6.3km. Its height (from rail level to roof) is 6.5 meters and minimum height of contact wire is maintained at 5.2m. LED lightening is provided at 10m intervals inside the tunnel. It is provided by two traction power supply sub-stations near Cherlopalli and near Rapuru. It will provide viable rail connectivity between Krishnapatnam Port and hinterland for seamless movement of freight.

It has nine railway stations along the route, 146 bridges, 60 road-under-bridges and two tunnels. It has no level crossings. It reduces distance by 72 km for trains coming from Guntakal division to Krishnapatnam and eases traffic density in the Obulavaripalli-Renigunta-Gudur section. It will facilitate operation of freight trains on Obulavaripalli-Venkatachalam-Krishnapatnam Port route. It will also provide shortest path on Chennai-Howrah and Chennai-Mumbai rail routes. It will ease congestion of both freight and passenger carrying trains in Vijayawada-Gudur-Renigunta-Guntakal sections.