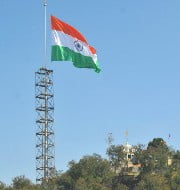 India’s largest tricolour was hoisted atop the tallest pole at Pahari Mandir in Ranchi,  by Defence Minister Manohar Parrikar.
This flag will remain hoisted for 24 hours and shall be illuminated with the help of twenty sodium vapour lights at night. It is world’s largest and the highest hoisted Indian flag.
Dimensions of flag: It measures 66 feet in height and 99 feet in width in the proper ratio 2:3. It was hoisted on pole with height of 293 feet. It weighs 80 kg.
Earlier Record
Until now, Faridabad (Haryana) had raised the world’s tallest national flag raised at a height of 246 feet in March 2015. It was unfurled by Bhartiya Janta Party (BJP) President Amit Shah. The unfurling event was organised by Nav Chetna Trust which is formed to work on social issues like beti bachao and swachh bharat.