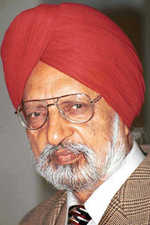 Noted agricultural scientist and pioneer of India’s Green Revolution, Gurcharan Singh Kalkat (92), passed away in Chandigarh after a brief illness.
He was known for his role in bringing Green Revolution and several exemplary agricultural reforms in Punjab. His contribution had ensured overall development and a phenomenal growth in the agriculture sector.

He was born in Hoshiarpur’s Sahora village on June 17, 1926. He had obtained his BSc Agriculture degree from Punjab Agriculture College, Lyallpur (now Pakistan) in 1947.
He had joined Ohio State University in January 1957 as a Rockfeller Fellow and had completed his PhD in agricultural zoology-entomology in December 1958. He was later honoured with Distinguished International Student Award of the university.
Kalkat also had worked as a senior agriculturist with the World Bank and was stationed at Washington DC from 1978-1989. During this period, he worked on agriculture and rural development programmes of Nigeria and Ghana where he was pioneer in introducing shallow tubewells for irrigation and hand pumps for drinking water. He also supervised implementation of World Bank assisted programmes in India, Sri Lanka, Nepal and Indonesia.
During his tenure as director agriculture, Punjab and agriculture commissioner (additional secretary), India had witnessed Green Revolution. He also had held reins of Punjab Agricultural University, Ludhiana as its vice chancellor from 1998 to 2001. He was awarded Padma Shri and Padma Bhushan for his work.