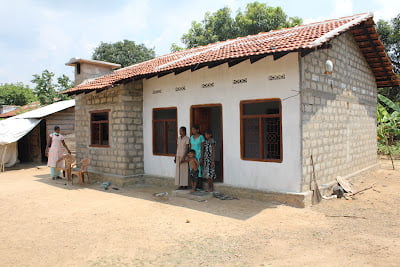 India has handed over 404 houses built for Indian-origin people in Sri Lanka’s tea plantation areas at Dunsinane Estate in Nuwara Eliya city. This is first lot of houses built under Indian Housing Project in Plantation Areas in Sri Lanka.

Under this project close to 47,000 houses so far have been completed out of total 60,000. With grant of over US $350 million, it is India’s largest assistance project in any country. Houses built under it are provided to Indian-origin people, mostly Tamils in Sri Lanka’s tea plantation areas. India is also considering to sign agreement for construction of additional 10,000 houses at cost of 12 billion Sri Lankan Rupees under this project.

Indian-origin Tamils, mostly employed in tea and rubber plantations in Sri Lanka, lack proper housing. They are mostly residing in central hill areas of the island country. They were brought from India by British rulers during 19th century to work in coffee plantations in Sri Lanka.  More than million are still associated with tea and rubber plantations. Though they have been given the Sri Lankan citizenship, housing is one of the major issue for these workers employed as daily wagers. Earlier, Sri Lankan Government led by President Maithripala Sirisena had formulated ational plan of action for the plantation workers and planned for construction of 55,000 houses till 2020.