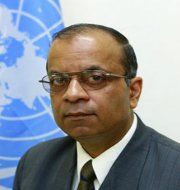 Indian diplomat Atul Khare is named as UN Under Secretary-General for Field Support, Department of Field Support (DFS). It was announced by Secretary-General of United Nations Ban Ki-moon.
He will succeed Bangladesh’s Ameerah Haq. This appointment makes him as one of the highest ranking Indian officials in UN.

This department provides dedicated support to peacekeeping field missions and political field missions around the world.
It also provides support in the areas of finance, logistics, Information, communication and technology (ICT), human resources and general administration to help missions promote peace and security.
His appointment to this position will bring strategic management and innovative reform expertise in both headquarters and field perspective of UN’s DFS.