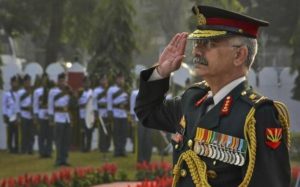 On November 5, 2020, Indian Army Chief Manoj Mukund Navarne was conferred with the rank of honorary General of Nepal Army. The President of Nepal Bidya Devi Bhandari presented him with a scroll and a sword during the honouring ceremony.

Chief Navarne is on a three day visit to Nepal. He is in Nepal to discuss “Army-to-Army relations and bilateral defence cooperation” with his counterpart.

The tradition of bestowing honorary title to the army chief of other countries has been in practice since 1950. Earlier, the Nepali Army Chief Chandra Thapa was honoured with similar rank by President Ram Nath Kovind.

The Commander in Chief Cariappa was the first Indian Army Chief to receive the honorary title in 1950.

India and Nepal hold “SURYA KIRAN” military exercise. The countries have been awarding honorary ranks to each other’s army chiefs from 1950s.  The Gorkha regiment of the Indian Army is raised through partial recruitment from Nepal.

In 2016, a 13-member delegation of Members of Parliament from Nepal was on a study tour to India. In 2019, Nepal formed the “Nepal-India Parliamentary Friendship Group”. The group consisted of members from both the parliaments. This was to help Nepal in its parliamentary planning and proceedings. India taught its methodologies through the programme.

Nepal shares its border with five Indian states namely Sikkim, Bihar, West Bengal, Uttar Pradesh and Uttarakhand. The countries have border disputes over certain regions along the border. They are Lipulekh, Kalapani and Limpiyadhura. Recently, the tensions increased as Nepal included these disputed territories in its political map.