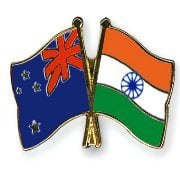 India and New Zealand have signed a landmark Air Services Agreement paving the way for introduction of direct flights between the two countries.
The agreement was signed in the presence of the President Pranab Mukherjee and the New Zealand Prime Minister John Key.
The agreement will lead to easier air connectivity between both countries that have inhibited both business travel and people- to- people contact in the past.
The Air Services Agreement was signed under the Convention of International Civil Aviation that aims to promote international air services between their respective territories.
Background
The two-way tourist traffic between India and New Zealand has witnessed sharp rise in recent past. There are nearly 1,75,000 persons of Indian origin  living in New Zealand of which about 15,000 are Indian students. The two-way trade between the two countries has doubled in the last few years. Business, Education and Tourism also have grown exponentially between both countries.