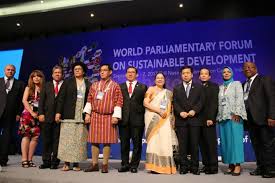 India has refused to be a part of Bali Declaration adopted at conclusion of World Parliamentary Forum on Sustainable Development held in Bali, Indonesia to show of solidarity with Myanmar.
It was not adopted because it carried “inappropriate” reference to violence in Rakhine State from where 1,25,000 Rohingya have fled to Bangladesh and was not in line with agreed global principles of Sustainable Development Goals (SDGs).

It calls on all parties to contribute to restoration of stability and security, exercise maximum self-restraint from using violent means, respect human rights of all people in Rakhine State regardless of their faith and ethnicity and facilitate safe access for humanitarian assistance.

India objected part of declaration highlighting deep concern on ongoing violence in Rakhine State of Myanmar. India reiterated its stance that purpose of convening Parliamentary forum was to arrive at mutual consensus for implementation of SDGs which required inclusive and broad-based development processes.
Therefore, proposed reference to violence in Rakhine in declaration was considered as inappropriate and not consensus-based. Moreover, country-specific amendment to declaration added at the eleventh hour by selective countries dilute the objective of these Forums which require unity and focussed efforts of all countries.

a Sufi-inflected variation of Sunni Islam. They differ from Myanmar’s dominant Buddhist groups religiously, ethnically and linguistically. They speak Bengali dialect, as opposed to commonly spoken Burmese language in Myanmar.
Myanmar considers Rohingya’s as illegal Bengali immigrants, despite fact that many they have resided in Rakhine province of Myanmar for centuries. The Myanmar government even refuses to grant them citizenship status, and as a result they do not have any legal documentation, effectively making them stateless. They are also restricted from freedom of movement, state education and civil service jobs. UN has often described Rohingyas as one of the most persecuted minorities in the world.