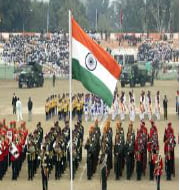 India has planned to invite the ten leaders of the Association of Southeast Asian Nations (ASEAN) as Chief Guests for 2018 Republic Day celebrations. This Plan has come at a time when India is engaged in a stand-off with China in the Sikkim sector.
If invited Republic Day 2018 would be the first Republic Day event that will have so many leaders as the chief guests. In the recent past, world leaders like former US President Barack Obama, former French President François Hollande and UAE Crown Prince Mohammed bin Zayed Al Nahyan have been invited as the chief guests for the Republic Day celebrations.

India’s commitment to strengthen its ties with ASEAN countries is reflected by its ‘Look East Policy’ becoming ‘Act East Policy.’ At the India-ASEAN Summit held in Myanmar in 2014, Prime Minister Narendra Modi had declared that India’s ‘Look East Policy’ has become ‘Act East Policy.’
With respect to the focus areas of cooperation with ASEAN, the External Affairs Minister described them in terms of three Cs-Commerce, Connectivity and Culture.
This year also marks the 25 years of dialogue partnership between India and ASEAN, 15 years of summit-level interaction, and five years of strategic partnership. India and ASEAN had upgraded their relationship to a strategic partnership in 2012.

ASEAN consists of 10-member countries- Brunei, Cambodia, Indonesia, Laos, Malaysia, Myanmar, Philippines, Singapore, Thailand and Vietnam. The founder members of the grouping were Malaysia, Indonesia, Singapore, Philippines and Thailand. Later the group was expanded by adding the remaining members with Cambodia becoming the last entrant added to the group in 1999.
ASEAN came into existence on August 8, 1967, after ASEAN declaration (also known as Bangkok Declaration). It is a regional organisation that aims to promote intergovernmental cooperation and economic integration amongst its members.