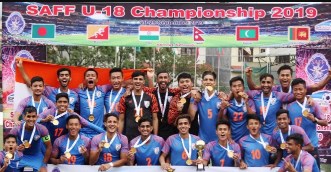 India won the SAFF Under-18 football Championship by defeating Bangladesh by 2-1 in final held in Kathmandu, Nepal. This is India’s maiden SAFF U-18 trophy.

Background: In 2015 football tournament India remained runners up and in 2017 India finished 3rd. The 2019 Host country Nepal had lifted earlier two editions of the Championship but could not qualify for semi finals this time.

Match Highlights: India played aggressively from the beginning of the match and Vikram Pratap Singh did not take much time to hand India a 1-0 lead.  Singh scored in 2nd minute of the game. Then before the conclusion of 1st half, Bangladesh’s Yeasin managed to score an equaliser in 40th minute which brought the scoreline to 1-1. In 2nd half, both the teams gave each other tough competition and restricted each other from scoring a goal. However, within 1st minute of injury time, Ravi Bahadur Rana scored 2nd and decisive goal for India to lift the third edition of tournament.

Most Valuable Player of Championship: Ninthoinganba Meetei of India

It is a football championship for male footballers under the age of 18. It is organized by South Asian Football Federation (SAFF). The championship was held for first time in August 2015 in Nepal.