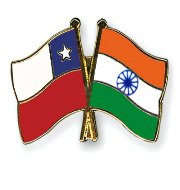 India and Chile have inked an agreement to expand the scope of their existing Preferential Trade Agreement (PTA) by covering more goods for tariff concessions.
A PTA between India and Chile was earlier signed in March 2006 and had come into force with effect from August, 2007.
Under the expanded PTA

Comment
Expansion of India-Chile PTA will enhance the trade and economic relations between the two countries. It will be an important landmark in India-Chile relations and consolidate the traditional fraternal relations that have existed between India and LAC countries.
India-Chile Relations