India and Bangladesh have decided to construct bridge along Mizoram Border 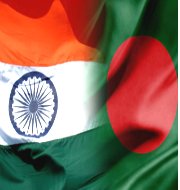 India and Bangladesh have decided to construct a bridge over Mizoram’s Khawthlangtuipui river (also known as Karnaphuli river) to facilitate trade and to improve communication between the two countries. The decision was taken after officials from both the side met at Tlabung town in Mamit district of Mizoram. The Mamit district is situated adjacent to Khagrachari district of Southeast Bangladesh.
The proposed bridge is expected to be constructed as closer as possible to the nearest custom station located in the Bangladesh side.

Mizoram has a 318 km unfenced border with Bangladesh. In March 2017, the Union Government had announced that half of the 4,096-km long border India shares with Bangladesh has been fenced. The remaining half will be fenced by 2019 deadline. India and Bangladesh share a 4,096 km land boundary, largest among the international boundaries that India shares with its neighbours. The border runs along five states, West Bengal (2,216.7 km), Assam (263 km), Meghalaya (443 km), Tripura (856 km) and Mizoram (318 km).