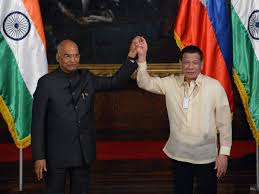 President Ram Nath Kovind is on his official tour to Philippines and Japan. In the first leg of his visit he reached Manila, Philippines on October 17, 2019. He met his Philippines counter part and signed four agreements on science and technology, culture, tourism and maritime. The agreement includes sharing of white shipping data. White shipping includes information about identification and movement of commercial and non-military vessels.

China claims most of the contested sea in the region. It includes waters close to the Philippines waters as well. In June 2019, a Chinese fishing trawler sank a Philippines boat. Many such mishaps are common in these waters. China had also dismissed a UN-backed international tribunal ruling that said that its assertion to the South China Sea is without legal basis.

Significance of the visit

Highlights of the visit