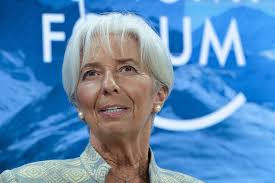 Following Lagarde’s nomination as President of ECB she announced to temporarily relinquish her responsibilities as head of IMF. She will now step down 2 years before end of her second five-year term as IMF Chief.

She would be succeeding Mario Draghi, whose term ends on 31 October 2019.

The 63 years old French, was the 1st woman to head International Monetary Fund (IMF) when she took the job in 2011.

In 2005 she was appointed France’s trade minister and in 2007 as finance minister.

She will next head European Central Bank starting November 2019.

It was established on 1 June 1998 with Headquarters in Ostend district, Frankfurt, Germany. It is the central bank of 19 European Union (EU) countries which have adopted Euro.

It is EU’s one truly federal institution which is responsible for administering of Euro and Monetary policy of Eurozone. It is one of the largest monetary areas in world.

After U.S. Federal Reserve, ECB is most influential central bank in world.

Mandate: To maintain price stability in Euro area and so preserve purchasing power of single currency.

It is not just most powerful position in Europe, far more significant than European commission presidency but is one of the most significant policymaking positions in world.

The position is currently held by Mario Draghi, who was widely credited with saving the euro during the eurozone debt crisis.

The International Monetary Fund recently announced Solidarity Tax on Pandemic Winners. That is, the ...

The Prime Minister of Italy, Mario Draghi, has put the climate change at the centre of his plans to ...

The leaders of the European Union have recently reached a deal on a massive stimulus plan for the co...

On 25th June 2020, a Tripartite Power Purchase Agreement (TPPA) was signed for the construction of t...