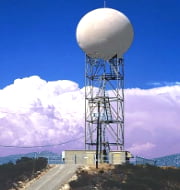 The India Meteorological Department (IMD) is planning to add 30 more doppler radars in the next two-three years across the country. 14 will be located in the northeast, four in Jammu and Kashmir and three each will be Uttarakhand and Himachal Pradesh.

The first Doppler radar in India was installed in Chennai, Tamil Nadu in 2002. Its need became more compelling after 2005 Mumbai floods. There are currently 27 Doppler radars in the country. The hilly states of Uttarakhand, Himachal Pradesh and J&K had witnessed erratic patterns like thunderstorms and heavy rains and snowfall, so do north eastern states. In 2013, erratic cloud burst in Uttarakhand had caused flash floods killing hundreds.

Doppler radar is an observational tool used for precisely monitoring and predicting severe weather events such as hailstorms, thunder storms, cyclones and tornados. It uses Doppler effect by bouncing microwave signal off desired target to produce velocity data. This data helps in analyzing object’s motion by altered frequency of returned signal. It mainly gives information about wind velocity and precipitation.
Doppler radar has radius of 250 km and helps in issuing forecasts two-three hours prior to severe weather conditions. It can provide area specific rain and storm warnings which are beneficial for disaster management and emergency response, aviation and related services. It can be used for wind speed measurements during cyclones and thunderstorms which is not possible in conventional weather radar.

IMD is the principal agency of Government of India responsible for meteorological observations, weather forecasting and seismology. It functions under Ministry of Earth Sciences. It is headquartered in New Delhi and operates hundreds of observation stations across India and Antarctica.
IMD is one of six Regional Specialised Meteorological Centres of World Meteorological Organization (WMO). It has been entrusted with responsibility for forecasting, naming and distribution of warnings for tropical cyclones in Northern Indian Ocean region, including Malacca Straits, Bay of Bengal, Arabian Sea and Persian Gulf.