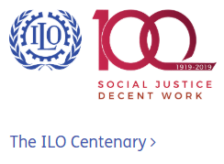 The ILO Centenary Celebrations in India were inaugurated by Union Minister of State (I/C) for Labour and Employment Shri Santosh Kumar Gangwar at V.V. Giri National Labour Institute, Noida.
India being a founding member has played an active role in every field of the organization. India has ratified 47 out of 189 ILO conventions during the century which includes all eight core conventions.

International Labour Organisation (ILO) is a tripartite organisation where representatives from the government, employers and employees openly debate and create labour standards. ILO is celebrating its 100th anniversary in 2019. As part of the 100th Anniversary, ILO is implementing seven centenary initiatives, which are:

The future of work initiative

The world of work is undergoing a major process of change. In order to understand and to respond effectively to these new challenges, the International Labour Organization has launched a “Future of Work initiative” in order to be able to advance its mandate for social justice.

The end to poverty initiative

The End to Poverty Centenary Initiative is designed specifically as the vehicle to take forward the ILO’s work in implementing the 2030 Agenda for Sustainable Development.

The women at work initiative

The women at work initiative aim to better understand and to address, why progress on delivering on decent work for women has been so slow and what needs to be done towards securing a better future for women at work.

The Green Initiative aims to scale up the ILO’s knowledge, policy response and capacity to manage a just transition toward greener economies and a sustainable future.

The standards initiative aims to enhance the relevance of international labour standards through a standards review mechanism and to consolidate tripartite consensus on an authoritative supervisory system.

The enterprises initiative aims to establish a platform for ILO engagement with enterprises which would contribute to their sustainability and to ILO goals.

The Governance Initiative aims to complete the reform of the ILO’s governance structures, to undertake the evaluation of the impact of the 2008 Social Justice Declaration, and act on the findings and outcomes of the evaluation.