Hindi poet and a litterateur Nand Chaturvedi passes away 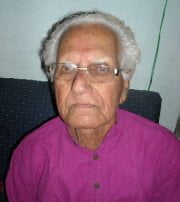 Noted Hindi poet and a litterateur Nand Chaturvedi passed away in Udaipur, Rajasthan. He was 91.
About Nand Chaturvedi
He was born in 1923 in Jhalawar, Rajasthan. He was poet, a litterateur and a socialist.
Career: He had done his Master of Arts in Hindi from Rajasthan University and was a retired Professor of Hindi subject from Vidya Bhawan Rural Institute.
Popular Work: Apart from teaching, he used to write poems. Some of his popular works include collection of essays like Yeh Samai Mamuli Nahin, Shabd Sansar ki Yayavari , Imandar Dunya Ke Liye.
Awards: He was awarded with Bihari Puraskar of K K Birla Foundation in for his poem ‘Yeh Samai mamuli nahin’. He also has received Prasaran Sanmaan by Prasar Bharati.
He is recipient of Sahitya Vachaspati award- a top literary honour of Prayag Hindi Sahitya Sammelan and Mira Puraskar– the highest literary honour of Rajasthan Government.