Guyana takes over G77 Chairmanship for 2020 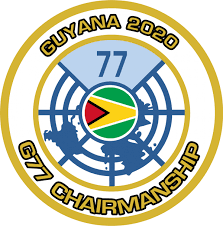 The South American country Guyana recently took over the chairmanship of the Group of 77 (G77) for the year 2020 from Palestine, which chaired the group for 2019. The Foreign Minister of Palestine formally handed over the gavel to the Prime Minister of Guyana.

The Group of 77(G77), which was established in 1964 in Geneva, is the largest inter-governmental organization of developing countries in the United Nations.  India a member of the G77, congratulated Guyana on taking over the chairmanship of the Group of 77 for 2020, the year which commemorates the 75th anniversary of the United Nations. Indian Ambassador, Deputy Permanent Representative to the United Nations, K Nagaraj Naidu stated that India has full confidence in the leadership of Guyana and believes that the Guyanese delegation led by their Ambassador Rudolph Ten-Pow will work towards further strengthening the unity and cooperation between the G77 countries. UN Secretary-General Antonio Guterres said that ‘in shaping priorities by driving challenges forward, the G77 has played a pivotal role’ as the G77 is the largest group of intergovernmental organization of developing countries.