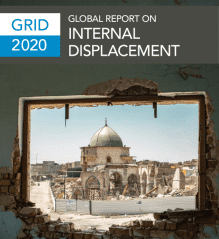 The 2020 edition of the GRID report listed India as the country with highest level of internal displacement in 2019.

The GRID or Global Report on Internal Displacement was recently released by IDMC. It reported that 50.8 million people were internally displaced in 2019. Most of this was due to violent conflicts while a smaller portion was due to natural disasters.

India had the highest level of internal displacement in 2019 with almost 5 million people being displaced from their homes. These were mainly due to increased hazard intensity, high population and social and economic vulnerability. 8 tropical storms, record wettest monsoon, more than 19,000 violent incidents, etc. were listed as contributing factors.

IDMC or Internal Displacement Monitoring Centre is a part of Norwegian Refugee Council and was set up in 1998. It is based in Geneva in Switzerland and is considered as world’s authoritative information source on internal displacement.