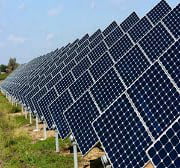 The Ministry for New and Renewable Energy sanctioned a 1,500-MW ultra mega solar power park for Andhra Pradesh.
The 1,500 MW ultra mega solar park will be developed in Kadapa district by NTPC, which will the third mega park of over 1,000 MW to be taken up by the state.
Earlier two mega parks of 1,000 MW each were executed by NTPC at Anantapur and Kurnool districts, respectively.
Part from the above projects the state utility Andhra Pradesh Genco has approved a move to set up a 500 MW (250×2) solar park in Anantapur.
Note: Andhra Pradesh Government has set target to develop over 9,000 MW energy from renewable sources by 2019, which includes 5,000 MW of solar and 4,000 MW of wind capacity.