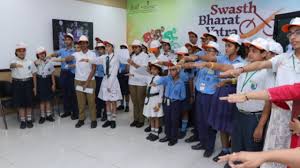 The Union Government launched national campaign ‘Swasth Bharat Yatra’ on occasion of World Food Day (observed on 16 October) to sensitise people about eating safe food and be healthy. The campaign has been launched in association with states and led by Food Safety and Standards Authority of India (FSSAI).

Under it, pan-India cycle rally is being organized to create consumer awareness about eating safe and nutritious food for becoming healthy and combating food adulteration. . In this rally, about 7,500 cyclists are expected to participate in over 18,000 km travelling across six tracks through almost every state and UT over 100 days to propagate a powerful message ‘Eat Right India’. The cyclathon will culminate in the national capital on January 27, 2019. This campaign will not only mobilise masses but also create large pool of local community to sustain this movement.