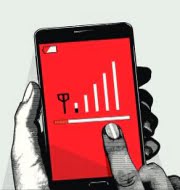 The Union Government has launched Integrated Voice Response System (IVRS) system in a bid to tackle the call drop menace.
The system was launched at multiple locations including Delhi and Mumbai to obtain direct feedback from subscribers on call quality on the issue of frequent call drops.
It is now available in Delhi, Mumbai, Punjab, Uttar Pradesh, Uttarakhand, Maharashtra and Goa and soon will be extended to the entire country.
How it works?

What is Call drop?
Call drop occurs after voice call is interrupted or disconnected before it is completed after being successfully established. Thus, it can be said that it represents telecom operator’s inability to maintain a successfully established call prior to their normal completion.
Reasons: Call drop may occur if signal strength of mobile tower of telecom operator goes below the minimum acceptable single to make a call. It may also even occur due to interference created by bad environmental conditions and because of improper hard handoff if user is moving from one cell to another cell.