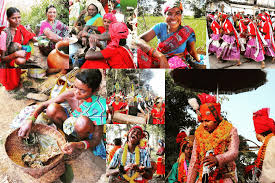 The Ministry of Tribal Affairs (MoTA) is going to expand Van Dhan Vikas Kendras in tribal districts across the country. About 3000 such kendras are proposed to be set up in two years in all forested Tribal Districts. Initially, it will be taken up on priority in 39 districts with more than 50% tribal population and then gradually will be expanded to other Tribal Districts across the country.

It aims at mainstreaming tribal community by promoting primary level value addition to Non Timber Minor Forest Produce (MFP) at grassroots level. It also aims to promote MFPs-centric livelihood development of tribal gatherers and artisans. Through this initiative, the share of tribals in the value chain of Non-Timber Forest Produce is expected to rise from present 20% to around 60%.
Implementation: It will be implemented through Ministry of Tribal Affairs at Central Level and TRIFED as nodal agency at National Level. At State level, state nodal agency for MFPs and district collectors will play pivot role in scheme implementation at grassroot level.

TRIFED will facilitate establishment of MFP-led multi-purpose Van Dhan Vikas Kendras in the tribal areas. These kendras will be cluster of 10 SHGs comprising of 30 tribal MFP gatherers each. They will provide skill upgradation and capacity building training and setting up of primary processing and value addition facility. Locally the Kendras will be managed by a Managing Committee (an SHG) consisting of representatives of Van Dhan SHGs in cluster.