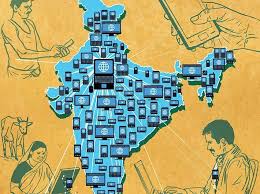 The Union Government has announced completion of first phase of BharatNet project after successfully laying optical fibre cables (OFC) in more than 1 lakh gram panchayats. As of December 2017, 2,54,895 km of OFC has were laid covering 1,09,926 GPs out of which 1,01,370 GPs have been made service ready.
The second phase of the project was initiated in November 2017 for connecting the remaining 1.5 lakh gram panchayats. Government is expecting to preempt second phase’s original target of March 2019 by concluding it ahead of schedule by December 2018.

BharatNet project forms backbone for Digital India initiative. It aims to bring high speed broadband to all 2.5 lakh gram panchayats (GPs) through optical fibre. The project was approved by Union Cabinet in 2011 as National Optical Fibre Netwok.
The objective flagship project is to provide affordable broadband services in rural and remote areas in partnership with states and the private sector. It being is implemented by Bharat Broadband Network Limited (BBNL). It is world’s largest rural broadband connectivity programme using Optical fibre.
Bharat Net seeks to connect all of India’s households, particularly rural areas, through demand, affordable high-speed broadband connectivity of 2 Mbps to 20 Mbps to realise the vision of Digital India. The project is being funded by Universal service Obligation Fund (USOF).
On completion, the project is expected to catalyse digital delivery of services for rural poor in crucial areas like health, education, livelihood, skills, e-agriculture and e-commerce. Moreover, it will generate massive employment opportunities, both direct and indirect in the country. The digital infrastructure