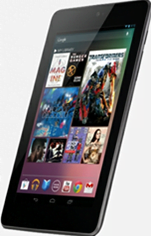 Google, at a conference in Sat Francisco, unveiled the Nexus 7 to contend with Apple’s iPad as well as the latest Microsoft’s Surface. It is built by and in co-branded with Taiwan’s Asus.

The tablet stands in direct competition with Amazon’s Kindle Fire tablet, which has been the most successful running on Google’s Android OS.