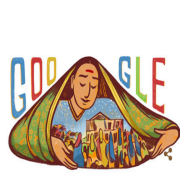 Search engine giant Google honoured India’s 19th Century social reformer Savitribai Phule on the occasion of her 186th birth anniversary (3 January 2017) by dedicating a doodle on its webpage.
The ‘doodle’ had a narration by New Delhi-based NGO Zubaan, with colourful paintings by Malvika Asher on the different historical aspects of Savitribai’s life.
It showed a group of demure women assembled outside what could be a school for education in a skyblue starry background which also doubles as her blouse.