P S Golay sworn in as new CM of Sikkim 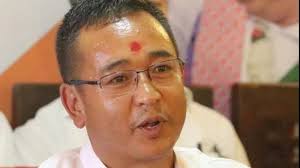 The 51 year old Golay is the sixth Chief Minister of the Himalayan State. He started his career as a school teacher. At the age of 26, he was elected to Sikkim Legislative Assembly in 1994 as an SDF candidate and went on to serve as Minister holding several portfolios for three consecutive terms till 2009.