Global Tiger population increased for the first time in 100 years by 22%: WWF & GTF 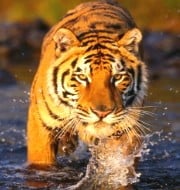 According to the World Wildlife Fund (WWF) and the Global Tiger Forum (GTF), the global tiger population has increased by 22 per cent after a century of constant decline.
The number of wild tigers across the globe has gone up globally by 22 per cent to 3,890, from the 2010 estimate of 3,200. The data was based on national estimates of countries reported by the International Union for Conservation of Nature and Natural Resources (IUCN).
Tiger population in different countries: