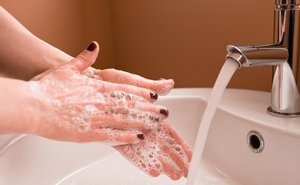 Global Handwashing Day (GHD) is celebrated on the 15th of October every year to motivate and mobilize people around the world to wash their hands with soap. The campaign is dedicated to propagating the benefit of washing hands with soap as a means of disease prevention.

Aims of the campaign

Reports suggest that simple behavioural changes like washing hands can reduce child mortality rates due to respiratory and diarrheal diseases by half. Also, figures released by WHO and UNICEF in 2013 show that more than 340,000 children under five died from diarrheal diseases due to lack of safe water, sanitation and basic hygiene. This amounts to approximately 1,000 children a day.

GHD was created at the annual World Water Week 2008, that was held in Stockholm, Sweden. The creation of GHD was initiated by the PPPHW (Public Private Partnership for Handwashing). The UNGA designated October 15 as the Global Handwashing Day and so the first GHD took place in 2008, which was the UN sanctioned International Year of Sanitation. The slogan for GHD is ‘Clean hands save lives’.
The focus of the inaugural GHD was on children, and encouraging them to wash their hands with soap. More than 70 countries, including India, actively participated in order to get the maximum number of school children washing hands.

The PPPHW is a coalition of international stakeholders, including multilateral agencies, UN bodies and multinational companies, who focus on handwashing and child health.