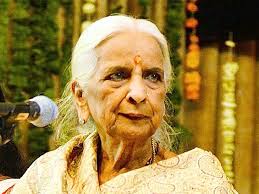 Eminent classical singer Girija Devi passed away following a cardiac arrest at age of 88. She was considered as queen of thumri, a common genre of semi-classical Indian music.

She was born in zamindar family at village near Banaras on May 8, 1929. She was legendary singer of the “Seniya and Banaras gharanas”. Music was a part of her life from a very early age. She had received Padma Shri (1972), Padma Bhushan (1989) Padma Vibhushan (2016), Sangeet Natak Akademi Award (1977), Sangeet Natak Akademi Fellowship (2010) and Maha Sangeet Samman Award (2012) etc.

Thumri (ठुमरी) is common genre of semi-classical Indian music originated in eastern part of Uttar Pradesh. The term ‘thumri’ is derived from Hindi verb thumakna which means to walk with dancing steps so as to make ankle-bells tinkle.
Thumri is connected with dance, dramatic gestures, mild eroticism, evocative love poetry and folk songs of Uttar Pradesh, though there are regional variations. Its text is romantic or devotional in nature and usually revolves around girl’s love for Krishna.