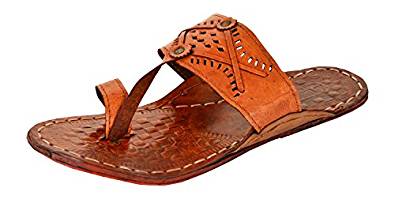 Uniqueness: These sturdy leather chappals are hand-crafted and tanned using vegetable dyes and the art of making them is passed down one generation to another.

History: As per GI application made by two states of Mharashtra and Karnataka, Kolhapuris can be traced back to 12th century when King Bijjal ruled Bidar (in Karnataka). King’s Prime Minister Vishwaguru Basavanna, wanted to create a casteless society and remove stigma attached to cobbler community, thus, the community embraced Lingayat faith and used its skills to start producing footwear that came to be known equally for its ruggedness and regal bearing.

‘Kolhapuri’ as a Brand was created only at beginning of 20th century when footwear began to be traded in Kolhapur (Maharashtra). Later, Chhatrapati Shahu Maharaj of Kolhapur encouraged its production and 29 tanning centres were opened during his rule in Kolhapur.

It will help artisans export these chappals and also tie up with e-commerce giants such as Flipkart and Amazon.

With GI tag now these local artisans get legal support. Thus, anyone who is going to copy this can be punished.

Getting GI tag will open large markets, both domestic and international to artisans who produce Kolhapuris. Also, getting GI tag for Kolhapuri means that footwear produced only in these 8 districts will qualify to carry tag of being Kolhapuris.

What is Geographical Indications?

GI is used on products/items which have specific geographical origin and possess qualities, reputation and distinctiveness which is essentially attributable to its origin in that defined geographical locality.

Validity: The tag is valid for a period of 10 years following which it can be renewed.

GI India: Recently Union Minister of Commerce and Industry launched logo and tagline for Geographical Indications (GI) of India. The 1st product to get a GI tag in India was Darjeeling tea (2004).

The sui generis Act for protection of GI in India is Geographical Indications of Goods (Registration and Protection) Act, 1999 (GI Act). This Act was enacted by India so as to comply with Agreement on Trade-Related Aspects of Intellectual Property Rights (TRIPS) by World Trade Organisation (WTO).