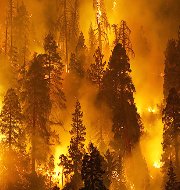 According to the report, 21.4% of Indian forests are prone to forest fires. The report has given the figures after a thorough study of fire points identified between 2004 and 2017. The study says that forests in central India and north-eastern India are most vulnerable to forest fires.

The total number of forest fire alerts issued between November 2018 and June 2019 were 29,547. Out of these alerts, Mizoram recorded the highest. Of the alerts received, one-third were from north-eastern states. The major reason for increased number of alerts in north eastern region is slash and burn cultivation (Jhoom Cultivation).

The report also said that the overall forest cover of the country has increased. However, the forest cover in the north east region has declined.

The Forest Survey of India begun in 1981. It is the successor of Pre investment Survey of Forest Resources (PISFR). The PISFR was supported by FAO (Food and Agriculture Organization). The report is published twice a year.