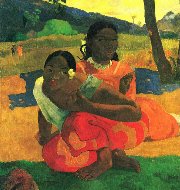 A painting of two Tahitian girls named as Nafea Faa Ipoipo (When Will You Marry) by the French artist Paul Gauguin has been sold for 300 million dollars.
It makes the painting as the most expensive work of art ever sold. This painting was painted in 1892 and was sold to a museum in Qatar.
This painting broke the previous highest price record for a painting by Paul Cezanne, sold in 2011 for a reported 158 million dollars to Qatar.