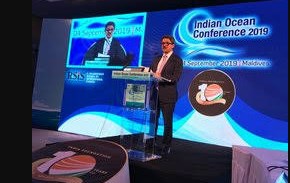 Organiser: It was organised by India Foundation (based in New Delhi), in association with Government of Maldives and S Rajaratnam School of International Studies (RSIS) in Singapore.

Participants: Ministers, officials and scholars from several countries are attending the 2-day event.

Conference discussion themes were grouped under 3 broad categories of-

Importance of IOR: With Indian Ocean region coming to global focus such as China seeking to increase its foothold in the region and with increasing need for countries from across the region to come together to confront terrorism and violent extremism, the littoral countries, including India gathered for a 2-day conference in Male. Many of the challenges faced by IOR poses serious and immediate problems for the region. Therefore these challenges require concerted and sustained partnership efforts across region and beyond.

Key issues for IOR underlined during conference include-

India-Maldives: MoU on cooperation in sports and youth affairs approved

The Union Cabinet chaired by the Prime Minister, Narendra Modi, has given its approval on March 16, ...

India and France held their annual strategic dialogue in New Delhi. ContentsWhat are the key takeawa...

The INS Kiltan recently arrived at Sihanoukville Port, Cambodia under Mission Sagar III. The ship is...