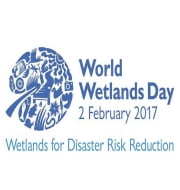 The World Wetland Day (WWD) is observed every year on 2 February to raise awareness about the value of wetlands for humanity and the planet.
Significance of Day: This day marks the date of the adoption of the Convention on Wetlands also called as Ramsar Convention on 2 February 1971 in the Iranian city of Ramsar.
2017 Theme: “Wetlands for Disaster Risk Reduction”. It seeks to raise awareness and to highlight the vital role of healthy wetlands in reducing the impacts of extreme events such as floods, cyclones and drought on communities, and in helping to build resilience.

Mangrove forests along tropical coastlines and in salt water environments are an important category of wetlands. They are a critical component of marine ecosystems, as they serve as nursery grounds for many aquatic species, including commercially important fish species. Mangroves also serve as excellent buffer zones between coastal lands and open ocean as they reduce the impacts of storms and keep coastal erosion under control. Mangrove forests also had reduced the impact of the 2004 Southeast Asian tsunami. These rich mangroves ecosystems are threatened mostly by conversion into agriculture and aquaculture (shrimp farms), urban and resort development and rising sea levels.

For first time, World Wetland Day was celebrated in year 1997. Since then it is observed every year to spread awareness about Ramsar Convention in particular for conservation of Wetlands.  The theme for the world wetland day 2016 was “Wetlands for our Future – Sustainable Livelihoods”.