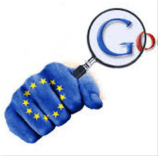 According to the European regulators, Google has abused its market dominance by offering an illegal advantage to its another product, its comparison shopping service.
The fine of 2.42 billion euro is the biggest fine for a single company in an EU antitrust case. It exceeds the 1.06-billion-euros slapped on Intel in 2009. EU’s action has come after a 7 year-long investigation from the complaints received from Google’s rivals such like Yelp, TripAdvisor, UK price comparison site Foundem, News Corp and lobbying group FairSearch.
The EU has asked Google to stop its anti-competitive practice in 90 days or be prepared to face penalty payments up to 5% of Alphabet’s average daily worldwide turnover.

November 2010: The EU opened its formal inquiry to ascertain whether  Google manipulates search results in a way that favours its own business.
April 2013:  Google came forward to change its practice in the hope of ending the EU investigation.
July-December 2013: EU rejected Google’s offer to change its search results as not good enough.
February 2014: A tentative agreement was reached between the EU and Google on how to fix the search results.
May 2014: In a separate case, the European Court of Justice had asked Google on the plea of EU citizens’ to remove irrelevant or embarrassing personal information that is being served on a search of their names.
September 2014: Acting upon the complaints of Google’s competitors, the EU made a U-turn on its settlement with Google on search results.
April 2015: EU formally charged Google and opened a preliminary investigation to ascertain whether Google used its Android mobile operating system to rig the market for apps.
June 2017: The EU has slapped Google a record 2.42 billion euros ($2.72 billion) for breaching antitrust rules with its online shopping service.