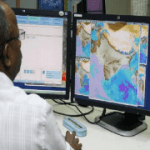 According to recent study by scientists from IIT Kanpur, erratic behaviour of monsoon rainfall, including phenomenon of concentrated heavy rainfall on small number of days in localized area can be attributed to the rising air pollution, especially the increase in suspended particles in the atmosphere. The study has found that high pollution levels are not just changing cloud shape and size and depth, but also its microstructure.

Key Findings of this study

Excess aerosols, suspended solid particles like dust, smoke and industrial effluents in atmosphere is changing cloud patterns, its shape, size and other properties like temperature, which in turn is resulting in variability in rainfall over Indian sub-continent during monsoon season.
Aerosols are extremely important for cloud formation. In absence of aerosols, no clouds can be formed and consequently no rainfall will take place. But due to increase in aerosol content in atmosphere, there is direct consequence of rising air pollution interfering with stable cloud formation system and influencing rainfall patterns.
In short term, these changes in cloud structure and cloud dynamics lead to sharp variability in rainfall, which is similar to rainfall patterns witnessed very often in India in last few years. In the long term, it is likely to lead to overall suppression of rainfall during the monsoon season.

Significance of this study

The linkage of air pollution to rainfall activity is not new and has been established in many earlier studies as well. But this is for the first time, study has given details of the exact changes that take place inclouds over India as result of increase in aerosols. It also shows how it is leading to reduction in difference in day and night temperatures and also impacting rainfall activity. For this study, researchers had analysed satellite data and data from atmospheric computer models from last 16 years to make an assessment of likely impacts of changes in cloud behaviour over land area of about 16 lakh square kilometres.

The Swiss group “IQAir” which measures the air quality levels on the basis of concentration of l...

The capital of China, Beijing, was shrouded with the brown dust on March 15, 2021 because of heavy w...

The Panel for Air Quality Management set by the Central government in around the National Capital Re...