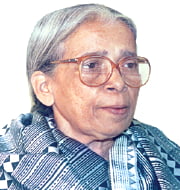 Eminent author and social activist Mahasweta Devi passed away in Kolkata, West Bengal after a multi-organ failure. She was 91.
Her writings had mainly focused on the marginalised communities in the country and served as the voice of the oppressed and downtrodden.