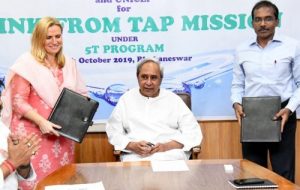 The state government of Odisha has signed a Letter of Understanding (LoU) with UNICEF (United Nations Children’s Fund) to provide safe drinking water to every household in the state. The LoU was signed by state housing and urban development department (HUDD) to provide 24-hour safe drinking water. The project has been named as ‘Drink from Tap Mission’.

About ‘Drink from Tap Mission’

The project is being undertaken with financial support from UNICEF, which will hopefully help in achieving state government’s target.

Implementation: As providing safe drinking water to every household in the state is one of top priorities of Odisha government, the project will be launched on a pilot basis for about 1.2 lakh people involving 22,000 families in pockets of Puri and Khurda district of Odisha. The pilot project will also be implemented in five areas of Bhubaneswar and two areas of Puri and will be completed by March 2020. It will be extended to other parts of the state in next phases.

The women self-help groups (SHGs) will also be engaged and trained for the implementation of programme.