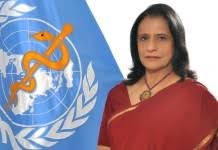 Dr. Poonam Khetrapal Singh was unanimously re-elected as World Health Organization (WHO) Regional Director for South-East Asia for another five-year term beginning February 2019. She was reelected by 11 member states of the Region during elections held at ongoing Regional Committee meeting of WHO South-East Asia. With this, India has retained top WHO position in South-East Asia Region.

She had served as civil servant in India as member of Indian Administrative Services for over two decades. She was the Health Secretary of Punjab.  Dr Khetrapal Singh’s ongoing first term as WHO Regional Director South-East Asia had started on 1 February 2014. It had made her first woman to have been elected to position of Regional Director. Prior to her WHO career, she had served in health sector in various senior positions during her stint in IAS and in World Bank. She also worked in WHO Director-General’s cabinet in Geneva, as Executive Director of Sustainable Development and Healthy Environments in WHO headquarters and was Deputy Regional Director WHO South-East Asia Region from 2000-2013.

It was established in 1948 and was the first of its six regions. It has 11 Member States: Bangladesh, Bhutan, Democratic People’s Republic of Korea, India, Indonesia, Maldives, Myanmar, Nepal, Sri Lanka, Thailand, Timor-Leste. It provides leadership on health matters, articulates evidence-based policy options, provides technical support to countries and monitors health trends in the region. It also fosters collaborative efforts of WHO for improving the health of the people in the region.