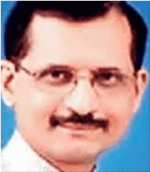 Dr Manoj Soni has taken Oath of Office and Secrecy as a member of the Union Public Service Commission (UPSC). The Oath was administered to him by the UPSC Chairman Prof. David R. Syiemlieh.
Born on 17th February 1965, Dr Manoj Soni was a former Vice-Chancellor of Dr Babasaheb Ambedkar Open University. He became the youngest-ever Vice Chancellor in independent (India). Manoj Soni is a scholar of Political Science with specialisation in International Relation Studies. He has earned his doctorate in “Post-Cold War International Systemic Transition and Indo-US Relations” from Sardar Patel University.
He has received several awards and recognitions such as “Honorary Mayor-President of the City of Baton Rouge” from Mayor-President of Baton Rouge, Louisiana, USA and World Education Congress Global Award for Distance Learning Leadership.

UPSC is a constitutional body that conducts the prestigious civil services examination. It has been established under Article 315 of the Constitution and consists of a Chairman and ten Members, who are appointed and removed by President. The chairman and members of the Commission hold office for a term of six years or until they attain the age of 65 years, whichever is earlier. Article 316 of the Constitution deals with the appointment and term of office of members.