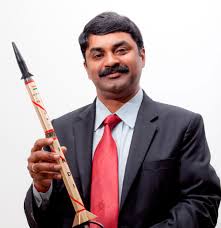 The Appointments Committee of Cabinet (ACC) has appointed distinguished missile scientist Dr. G Satheesh Reddy was appointed as Secretary of Department of Defence R&D (DDR&D) and Chairman of Defence Research and Development Organisation (DRDO). Prior to this appointment he was scientific adviser to defence minister and director general, Missiles & Strategic Systems (DG MSS). Union Government in May 2015 had bifurcated post of scientific adviser to defence minister-cum-DRDO chief, which was held by one person till then.

He is well known for his significant contributions to indigenous design, development, deployment of diversified missiles and strategic systems, guided weapons, avionics technologies and for sustained efforts in advancement of aerospace technologies & industries in India.
He hails from Nellore in Andhra Pradesh. He had graduated in electronics and communication engineering from JNTU, Anantapur, and received his MS & Ph.D from JNTU, Hyderabad. He joined Defence Research and Development Laboratory (DRDL), Hyderabad in 1986. Subsequently he had joined Research Centre Imarat (RCI), which is brain child of scientist and late president Dr APJ Abdul Kalam, after its formation.
He was elevated as Distinguished Scientist in September 2014 and was appointed as scientific adviser to defence minister in May 2015.  In this role, he had significantly contributed to formulation of many national policies and was pivotal in evolving roadmap for self-sufficiency in missiles.
As DG of Missiles and Strategic Systems (DG, MSS), he had spearheaded Abdul Kalam Missile Complex Laboratories – ASL, DRDL and RCI, ITR, TBRL and other technical facilities. He also had led design and development of wide range of tactical and strategic missile systems to attain complete self-sufficiency in missiles and initiated many projects to equip armed forces with state-of-the-art weapons and technologies.
He also had played important role in invigorating Ballistic Missile Defence (BMD) programme and developed mission critical technologies for long range Agni-5 missile. As director, RCI, he had led many programmes, projects and steered development of indigenous RF and IIR Seekers.