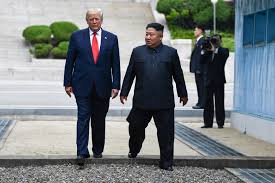 This was the third meeting between two leaders in just over a year on old Cold War frontier that for decades has symbolised hostility between their countries, which are technically still at war.

2nd summit: In February 2019 in Hanoi, Vietnam called as 019 North Korea–United States Hanoi Summit, or Hanoi Summit. This meet was cut short and that no agreement was reached as two sides failed to narrow differences between US demand for North Korea to give up its nuclear weapons and a North Korea’s demand for relief of sanctions.

Why is meet Important?

Now for years North Korea has pursued nuclear and missile programmes in defiance of United Nations Security Council (UNSC) resolutions and easing tensions with North Korea and denuclearisation of Korean peninsula is one of US president’s top foreign policy priorities.

North Korea (DMZ) was set up after 1950-53 Korean War ended in an armistice, not a truce, leaving North Korea and a US-led U.N.