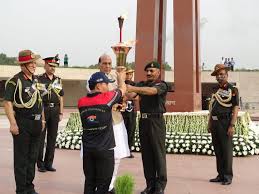 Theme of 20th anniversary of Kargil Vijay Diwas- Remember, Rejoice and Renew which stads for- The country all together ‘remember’ our martyrs by revisiting their sacrifices, ‘rejoice’ by celebrating victory in Kargil and ‘renew’ our resolve to safeguard honour of Tricolour.

The Victory Flame was lit by Defence Minister Rajnath Singh along with General Bipin Rawat, COAS, Subedar Sanjay Kumar, PVC who handed it over to ace army shooter Subedar Jitu Rai, as 1st torch bearer of the Flame.

Indian Army is celebrating this kargil war victory in memory of its brave martyrs with events covering a myriad spectrum.

It will pass through 9 major towns/cities of North India and finally culminate at Kargil War Memorial located at Dras on 26 July 2019, where it will be received by General Bipin Rawat, COAS.

All along journey of Victory Flame, Indian Army personnel will be paying homage to heroes who fought valiantly for Nation.

It symbolizes coalescence of souls of Kargil War martyrs.

Its design has been inspired by grit, guts and glory displayed by immortals who made supreme sacrifice for motherland in finest tradition of Indian Army.

Torch of Victory Flame is made of copper, brass and wood which symbolizes tenacity and determination of country’s fallen heroes.

Upper portion of Torch has a metal etching of Amar Jawan that epitomizes fallen Unknown Soldiers.

Lower portion of Torch is Wooden and it has 20 gold embossed inscriptions of Amar Jawan exemplifying 20 glorious years of Kargil Victory.

The Indian Army has set up a memorial to honour twenty soldiers who lost their lives in Galwan Clash...

On February 25, 2020, the first anniversary of National War Memorial was commemorated. The CDS Bipin...

The Assam Rifles has constructed war memorial for 357 personnel who sacrificed their lives fighting ...

Every year, Armed Forces Veterans Day is celebrated on January 14. The day is being celebrated since...