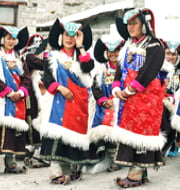 Three day long tourism promotional Ladakh Singhey Khababs Sindhu (also known as Sindhu Darshan) Festival has begun in Jammu and Kashmir’s Ladakh region.
It was inaugurated by Chief Minister Mufti Mohammad Sayeed to promote the tourism potentials of Ladakh. The inaugural function of the festival was organised this morning on the bank of the Indus River near Shey village in Ladakh.
In this edition of festival, local traditions and cultures like folk’s songs and dances will be presented along with customs, traditional archery and polo games and local handicrafts.
Singhey Khababs Sindhu festival was started in 2001 by Union government to promote Lakakh as tourists’ destination in the country. Since then it is organised annually.
It is celebrated to endorse the Indus River (Sindhu River) as a symbol of the communal harmony and unity of India. It also promotes cultural values and tourism in the region.
The Festival starts with a colourful ceremony on the bank of the Indus River. Since it establishment it has helped Ladakh region to become most preferred tourist’s destination and also as a popular spot for shootings films.